The Dopod C720w was codenamed HTC Excalibur in the months leading up to its release. It runs on the Microsoft Smartphone platform, meaning it has no touch screen. If you were like me and ready to write off this phone simply because it has "no touch screen", take a look at this review. I found the C720w to be a reasonably priced phone with powerful PDA and messaging functions.

INCLUDED IN THE BOX

*I have tested a Sandisk 2GB Micro-SD card which seems to be recognized just fine.

Dopod’s official specs are available here, but they incorrectly specify this as a Windows Mobile 5.0 Phone Edition, which implies it has a stylus and touch screen.

The C720w is the first device manufactured by HTC that has the Blackberry-style screen and keyboard setup. The screen measures 2.4" across the diagonal, and while this might have been too small for a touch screen device (the XDA Stealth has a 2.4" screen), it’s a great fit for a Microsoft Smartphone.

The black exterior can best be described as a semi-nonslip, hard plastic material, which has been (so far) excellent in terms of scratch resistance. It’s not the same as the slippery plastic housings of past PDAs, and having the rubbery qualities help it stay in your hand better.

Looking around the device, you will find it to be refreshingly simple: the sides of the C720w are not loaded with a ton of dedicated hardware buttons. In fact, the only real side button is the power button, found on the left side of the unit. By default, pressing the power button brings you to a Quick List where you can select different options such as:

The mini-USB connector, located on the bottom, is protected by a rubber tab that is easy to flip out of the way for charging.

The top set of keys immediately below the trendy Dopod logo, consists of:

The layout of these keys is good and I have no big concerns. The buttons are easy to press and their sizes ideal. There is enough separation between each key so that buttons are not pressed by mistake.  The directional-pad is easy to navigate, and the enter button is also easily accessible because of the way it’s slightly raised. It is worth noting that all the keys of the front are backlit to ensure smooth operation even in dimly-lit situations.

The C720w keyboard consists of 30+ keys. Adjusting from the large and spacious keyboard of the 838Pro (HTC Hermes) took some effort, but not as hard as originally anticipated.  I went from "wow these keys are definitely too small" to "this is actually usable" within a few days. Even with my rather large fingers I am now having no problems typing out complete messages on SMS, Gmail, and MSN Messenger. The familiar "FN" button on the bottom left which acts as a shortcut to secondary key functions: for example, pressing FN, then M, and you will get "!" (the exclamation mark).

Few other notables regarding the keyboard:

On the right side of the unit is HTC’s new JOGGR navigation system. These are not physical buttons that you can press, but rather sensitive "areas" that respond to  slightest of touches. The middle section is a scroll wheel — slide your finger upwards to scroll up, downwards to scroll down. Note that this action will scroll one line or one screen at a time, depending on the application. In order to scroll continuously, you must quickly slide twice and hold on to the JOGGR.

The top and bottom JOGGR "buttons" can only be invoked by double-tapping. By default, the top button acts as the "back button", while the bottom button will start the messaging application, defaulting at Outlook mails.  It would have been nice to be able to customize the behavior of these two, as their functionality can largely be duplicated with the keyboard.

The one complaint I do have with the JOGGR: it was almost impossible to press the power button (located directly opposite) without somehow activating the JOGGR. Coupled with the fact that these keys do not offer any measurable advantage over the hardware keyboard, I have gone ahead and completely disabled JOGGR — and (sadly enough) have discovered it to be good riddance. 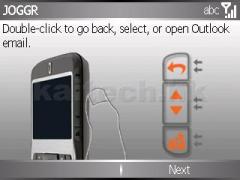 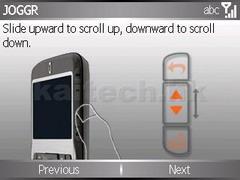 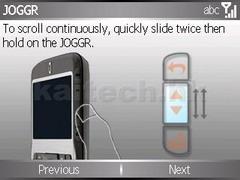 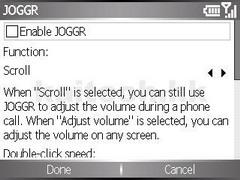 The camera on the back of the unit is
1.3MP. There is a self-portrait mirror, but no flash or LED light. The
camera works "okay" in broad daylight, but don’t expect too much from
the built-in camera:

The silver-colored number keys are application-sensitive: they automatically act as numbers in required situations.

A nice added convenience is that typing any number of letter in the Home screen will immediately initiate a search for a phone number or contact.

The standard Windows Smartphone home screen is shown below. The top row shows the list of most recently opened programs and below that is your service provider, WiFi status and time/date. Hitting "enter" while this second row is highlighted will open Comm Manager. Below that is your upcoming appointment (shows only one), followed by the currently selected profile, which is in this example is "Normal".  If you keep scrolling, the number of text messages and Hotmail messages are shown. 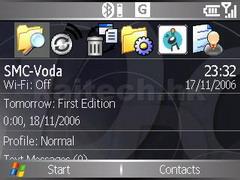 Here you can see the installed programs: 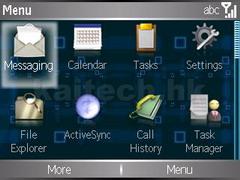 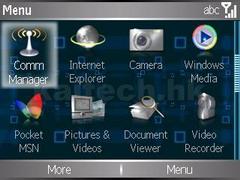 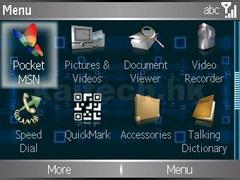 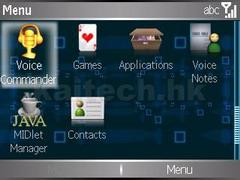 You may have noticed the menus look pretty snazzy, and that’s because Dopod has included a "3D" menu option that upgrades the look. Look at the difference between 3D (left) and 2D (right): 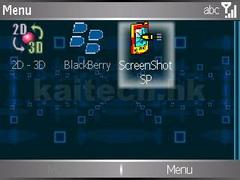 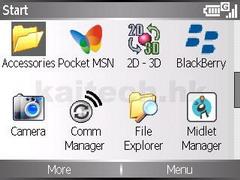 Because Microsoft Smartphones do not have touch screens for stylus freehand, the Pocket PC Notes application has been modified slightly on the C720w. In its place is Voice Notes which does what its name suggests, that is, record and playback your notes to self. You can even set a note to be your ringtone if you wish!

For those that want to or need to communicate in Chinese, you will be happy to know Chinese-language support has been built in to the operating system. Traditional Chinese characters are displayed perfectly, and there is no need to mess with third party applications like CE-Star anymore as input methods: the "5-stroke" input method is supported out of the box. 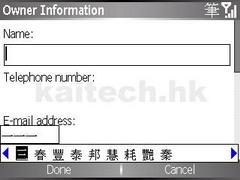 A big omission on the Smartphone is that there are no Microsoft Mobile Office applications. You won’t be able to create and edit Word, Excel, and Powerpoint files. Instead, they have included an application suite with Adobe Acrobat Reader LE and the ClearVue Office-equivalents: Document, Presentation, and Worksheet. Keep in mind that these only allow you to view the documents and not create and edit them. 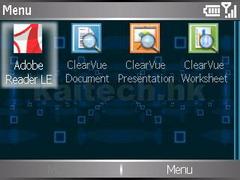 Comm Manager should be familiar to those who’ve used any of the recent HTC phones. With this app you can adjust various connectivity options including:

The two quickest shortcuts to this app are Power Button+"2" or Home+down direction+enter. 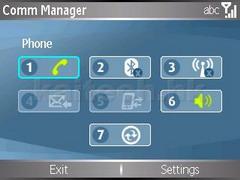 Windows Media Player is included and will be familiar to its bigger brother on the Pocket PC. A2DP is supported on the C720w and the sound quality was excellent with my set of i.Tech S38s.  One issue I did have is that Media Player would not detect my 2GB Sandisk MicroSD card as an option under Library. I could not add files from it but could open and play songs directly off the SD card. More testing is required to determine if this is a bug with WMP and the 2GB card. 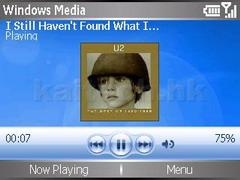 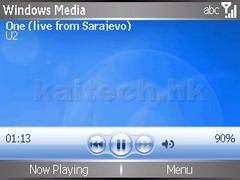 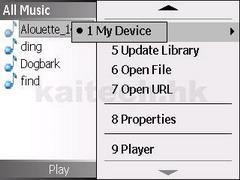 In the C720w, you only have the choice of one alarm time, as opposed to four on the Pocket PC. 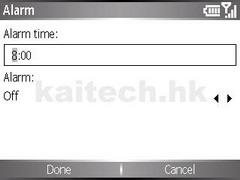 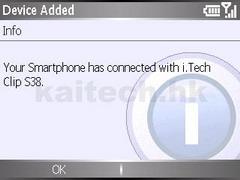 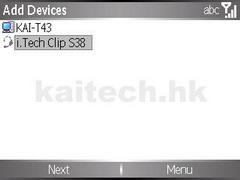 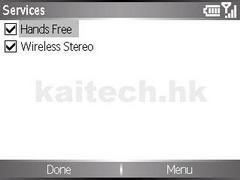 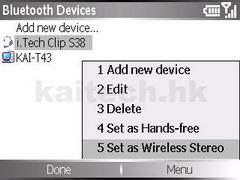 The included Talking Dictionary: it will pronounce the words in English in a Dr. Sbaitso-tone, but not in Chinese! (if you knew the Dr. Sbaitso reference without clicking the link, give yourself a pat on the back!) 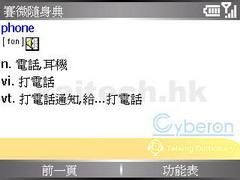 Installing Gmail’s java midlet lets you access your Gmail on the C720w: 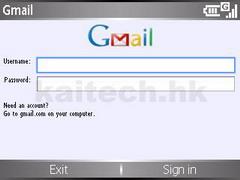 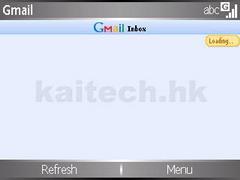 A> Cannot be improved
B> Can be fixed in time

After extensive use of this device, I have discovered that the C720w is first and foremost a phone with PDA functions. It isn’t as "powerful" as the 838Pro but that may very well be an advantage depending on the target user. If you’ve ever been intimidated by a Pocket PC Phone, then I think a Smartphone such as this C720w is a perfect compromise device: it syncs all your calendar entries and contacts with Outlook and one could even argue that it’s more powerful than the 838Pro based on its simplicity. Moreover, it supports Push Email, Bluetooth (with A2DP that lets you listen to music wirelessly), Wi-Fi and EDGE/GRPS. There is no 3G support, but for the intended market, this is just fine.  The price is right as well: at $3380 MSRP, I think it is fantastic in terms of the features provided.