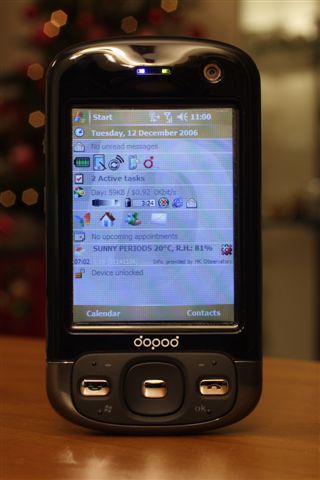 In the past month or so the PPC phone shelves in the electronic stores of Hong Kong have become increasingly crowded. Not long after the Dopod 838Pro and O2 Stealth arrived, the Treo 750v showed up, and then the Dopod C720W. More recently, there have been sightings of the Asus 535 and Eten Glofiish X500. Now HTC has released yet another one of their products here in the guise of the Dopod D810. Similar in specifications to the 838Pro, but more in the Dopod 818Pro form factor, the D810 packs in a lot of features. The phone features include a large coverage of cellular networks and data standards including HSDPA.

NB. As of July 2007, the Windows Mobile 6 OS is now an official feature of the D810. The rom is available on the Dopod/HTC website.

As of March 2007, GPS is now an official feature on the D810 in Hong Kong. Rom codes in Chinese and English are now available at the DopodAsia website. If your current Rom does not have GPS activated head to DopodAsia and download the new Rom. Be sure to register your unit first.

The design of the D810 is somewhat similar in shape to the Dopod 818Pro. One obvious change at the front of the unit is the secondary camera on the top-right for video calling when on a 3G network. The control pad has been pushed down slightly to almost flush with the bottom of the unit, very similar to how it is placed on the O2 Atom.

The bottom of the unit houses the USB connector, soft reset hole and the IR — like the 838Pro, there is no more headphone jack. The supplied wired headset must now be plugged through the USB connector. Storage for the stylus is on the bottom right corner.

The right side of the unit houses the camera button, MiniSD slot, Voice Command/record (notes) button and the power/standby button.

On the left side we see the a scroll wheel and OK button.

On the back of the phone we have the camera, external speaker grille and rubber cover for the external antenna connector.

The D810 comes with a decent 1500mAh rechargeable battery.

First thing that catches your eye when you take the phone out of the box is the nice glossy finish of the outer shell. The next thing that catches your eye are the finger prints you put onto the phone once you pick it up. The D810 is definitely a fingerprint magnet, but I still think the high gloss finish is superb. I would expect the white version not to show the fingerprints as clearly. So far from the daily use of bouncing around from desk to desk and my pants pocket when walking about, it has been quite resistant to any minor scratching.

I like the feature of the scroll wheel that has been added to the D810. It acts as a volume control with audio software such as with the Phone and Media Player and acts a scroller for other programs. I found it quite useful in Internet Explorer to scroll quickly down a particularly long page.

Personally, I found it was good that they used MiniSD for external memory. Coming from the O2 Atom it was a simple transfer of card from one unit to another. I have seen many new models coming out which now use MicroSD. Sticking to MiniSD may be a saving in itself as the price/MB is still cheaper at the moment.

The one thing that has impressed me most is the battery life. This is my first PocketPC phone that does not appear to suck battery power. In standby mode, the power meter on the D810 stays in one location for a very long time. This is unlike my previous PocketPC phones, where my battery can drain to 90% on standby within 2 hours.

The other surprise though is how battery-friendly it is when you actually use the phone and its pda functions. On any day if given the opportunity I will use the features on the pda whenever I can. This includes using the wifi, gprs, A2DP and sms texting (and a lot of it at that!). With my previous PPC phones I have had my battery level down to below 20% at the end of the working day, which from then on usually never lasts through the evening. I learnt to tether the phone to a power supply whenever I was in the office, and I also carry a charger in the car to avoid a dead battery! Now with the D810 it is great to know that I can use the pda features without worrying about where I can charge my phone!

I have read about the Dopod cameras as being quite good in taking sharp photos, and was quite looking forward to trying it out and the macro. To my complete surprise the macro was missing! I had always thought the macro switch was standard on these Dopod cameras. That is a shame really as I think I would use the camera more often in taking close up shots. Nevertheless the photos were reasonably sharp for a fixed focus lens. Colours are a little bland even when trying out different autobalance options. Digital zoom was a waste of time. Low light shots were produced reasonably well if compared to other camera phones. Also missing is a built-in flashlight. Not necessarily an important omission as I found these lights not helpful when used in taking photos. A real flash will be a nice addition in future.

If you don’t take the video camera too seriously it can be a lot of fun. The video playback comes out quite sharp when viewed from the pda screen. Makes for some interesting snap video for Youtube.

The screen captures I am presenting are items I thought were of interest and by no means cover all the features available on the D810. As WM5 is quite a mature OS now, many of the standard software such as Pocket Word, Excel, PowerPoint and Explorer have been covered before and can be found readily elsewhere.

The Task Manager is a useful utility to give you the option to close an application completely when finished. Usually when you close a program in WM5 it still resides in the background, taking up precious memory. When too many programs are open at once this may reduce the program memory and slow performance. Enabling task Manager will will place an ‘X’ on the top right corner of the screen in. You will find the ‘X’ in the subsequent screen captures.

I have had varying success rates with Voice Commander and its interpretation correctness. As ambient noise levels increase around you the less accurate it becomes. I have tried Voice Command from Microsoft and also found it to have varying degrees of accuracy so I have never been that impressed with voice recognition software. What makes Voice Commander different is that there are a lot of extra tweaks in the settings to help with the accuracy. If you are unable to get Voice Commander to recognise a particular contact you can put in your own voice tag and this helps increase accuracy significantly. You are also able to voice tag applications and songs, and can train it for single digits so you can dial out a particular number.

To activate Voice Commander you quickly press the Voice button on the right hand side of the unit. A screen summary of what commands are available will then show up. When a command is acknowledged the results are summarised, as in the example above where I asked “what time is it?”

I also found that I could activate Voice Commander by pressing the answer button on my Bluetooth headset.

I quite like the design of this phone as it is quite comfortable to hold in the hand. I missed the scroll wheel way back when I had the SE P900 so am happy to see it back, but this time on a PPC. I actually do like the glossy finish on the phone so I am prepared for extra duty in polishing off the fingerprints whenever possible.

Button placements seem comfortable and logical. The scroll wheel is more comfortable for me in the left hand where I can scroll with my thumb. It feels less comfortable when holding with the right hand and scrolling with fingers. I wonder if the camera button has been placed too close to the corner of the phone or should be recessed a little as I have activated it by accident on occasions without realising it.

Overall I find the Dopod D810 to be a very competent PPC phone. I have been using it whenever possible and find that it runs very smoothly. No major hang ups or crashes. There is one occasion where it does slow down considerably and that is when I am listening to music over A2DP with Bluetooth. If I try to text on MSN or SMS at the same it becomes a very slow process. I normally use Block Recognizer and there will be a significant delay between inputting and finally seeing text on the screen. Other than that, it is a pretty snappy performer.

I think what has been most impressive for me is the battery life when compared with the previous generations of PPC phones. The phone in standby appears to use very little power. Dopod claims up to 250hr standby and I might just believe that. To be honest though if you buy this kind of phone you plan to also use the pda functions. For me I am happy to know I can do just that and not worry about a rapid drain on the battery.