At the WWDC, Apple announced a few significant changes to its MacBook line. 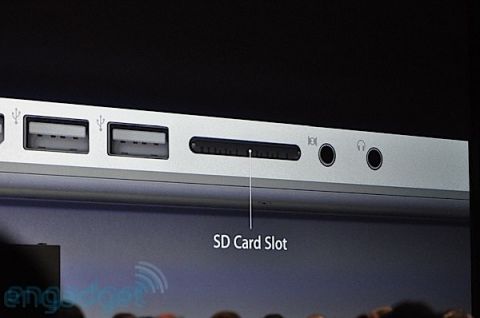 Yes, that above is an SD-slot! It has replaced the ExpressCard slot in a few MacBook Pro models.

The 15″ MacBook Pro gets the same revolutionary built-in battery as the 17″ version, which means Lithium-Polymer with up to 7 hours of battery life. The battery has an estimated lifespan of 1,000 recharges = 5 years.

As for the 13″ Unibody… it has been rebranded the MacBook Pro, with the same 7-hour battery:

Last but not least, the MacBook Air also received a couple facelifts and welcomed price slashes:

So there you have it, the new line of MacBooks with a ton of 8s in the pricing. Who’s ordering one of these new MacBooks?

Head on over to the Apple Hong Kong store to get all the details.