Finally, inertial scrolling has come to our trackpads on older MacBooks via Magic Trackpad and Multi-Touch Trackpad Update 1.0. The 79MB update requires a restart but now my mid-2009 13″ MacBook Pro has inertial (momentum-based) scrolling. The faster you flick, the further you scroll. Previously I had a 3rd party app installed but this official update adds much smoother inertial scrolling.

I haven’t figured out how to use the 3-finger gesture for window dragging yet, nor did I see a new option in the Trackpad prefpane. 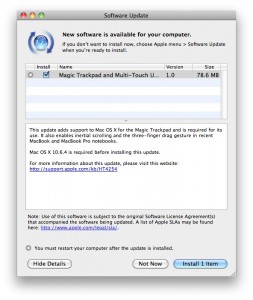 Apple also released updates for Windows that add support for the Magic Trackpad. A 6.62MB update is available for 32-bit flavors of Windows, while the 64-bit software is 3.98MB.

These Mac portables support inertial scrolling and the three-finger drag gesture after you install Magic Trackpad and Multi-Touch Trackpad Update 1.0: