It appears to address the issue of the non-functioning of lenses in continuous mode. They stated the upgrade works for the “non-compatible” lenses.
As mentioned in my original report I came across this problem with a few of my Canon lenses.|
I am happy to say that the problem appears to have been resolved. I have tried the 24-70mm and the 40mm Pancake lens and they were very well in continuous mode now. I have not tried it on the 100-400mm lens yet, but I am hopeful that this lens will be fine as well. I will report on this one later.

Last week I was looking everywhere, high and low for the Sigma MC-11 adapter and was so happy to have found it a few days ago. This Sigma adapter foremost allows me to attach my Sigma lenses , with EF mounts made specifically for Canon cameras, to my Sony a7r mk2. Theoretically the adapter can also be used to attach Canon lenses to my Sony camera as well. 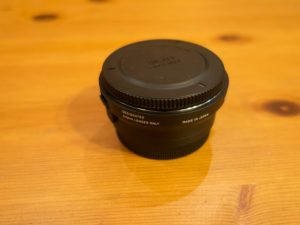 I bought the adapter mainly to allow me to attach my Sigma 150-600mm Contemporary EF lens. I already own 2 other adapters made by Techart and Pro-Tama. While these 2 adapters do work with the Sigma Superzoom they only appear to AF to a certain degree and I found the ability to AF was inconsistent. Sometimes there would stop working altogether. They were mostly unreliable at 600mm while trying to focus long range towards infinity. Sigma’s claim that with their Sigma lenses adapted to the Sony cameras using the MC-11, it will allow them to work natively with the camera.

The adapter looks well made and feels quite robust. The quality seems to be in line with a product that has a “Made in Japan” label on it. It actually fits on quite nicely to the Sigma lenses that I have. At a glance you wouldn’t really be aware that the lenses have the adapter attached to it. Apart from the Sigma Superzoom I also have the Sigma Art 50mm f1.4. The new range of Sigma Art, Sport and Contemporary lenses are nicely designed and I think are quite appealing to look at. I have to think the adapter has been designed to adopt the same feel and finish. A nice little touch is the addition of an LED light on the adapter to notify you of compatibility with the lens and adapter. A green light indicates full compatibility. A flashing light indicates compatibility, but a firmware upgraded is needed for the lens. If no light appears it is a warning that the lens may not operate properly with the adapter. 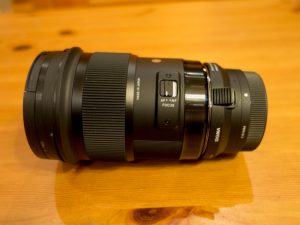 I am happy to report that the Sigma lens appear to have adapted very well to my Sony A7r mk2. All the focus mode and focus area options appear to be available to me. I am most happy with the fact that the AF works very nicely at 600mm even while trying to focus towards infinity. I do own a Canon 5Dm3 for which the Sigma Superzoom is designed for. If I compare the AF speeds of the 2 cameras, then the Canon is still faster. The speed and accuracy that I am getting with the Sony and Sigma seem good enough for my needs, though. The performance of the MC-11 adapter exceeds the performance on my other adapters by a long mile. I have read other users have had problems with continuous AF on subjects when they are coming towards you. It seems that the lens may stop tracking. I have not had a chance to try this out in detail, but this may be an issue.

Some bad news is that I have had some problems with a few of my Canon lenses when used with the MC-11. I have come across camera lockup with some lenses when it is in AF-c and AF-s while the shooting is set to high speed continuous. Unfortunately this is my choice setting for my camera. The lockup can be fixed by setting the camera to single shot or slow continuous, which are settings that I rarely use. It seems to be a problem with the newer released Canon lenses. The Canon lenses that I had this experience with was the EF 24-70mm f2.8 L mk2, EF 100-400mm f4.5-5,6 L IS mk2  and the EF 40mm pancake STM f2.8.

It would have been nice to have a “one that fits all” adapter, but Sigma did make this for their own lenses. It is good that at least some of the Canon lenses work and quite well too. Fortunately my other adapters perform very well with the Canon lenses that lock up. So at the very least I can carry 2 adapters, which should not be a problem. As the MC-11 is firmware upgrade-able perhaps the lockup will go away with any new subsequent firmware upgrade. For now I am quite happy to have a very capable superzoom to work on my Sony a7r mk2.