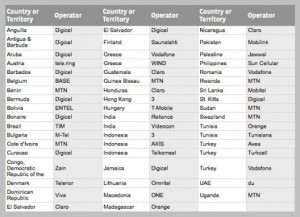 If you are a Three HK subscriber, you can now access Facebook's "Zero" mobile site for free - the data usage on 0.facebook.com will not count towards your monthly statement.  Zero Facebook for Hong Kong will provide free Facebook browsing only for Three subscribers, as evidenced by the following chart: It is not clear whether other mobile operators in the region will be added in the future. via 豁免流動數據費 Zero Facebook登陸香港 « 案內人隨筆. … END_OF_DOCUMENT_TOKEN_TO_BE_REPLACED

The HTC Wildfire was named in large part with help from HTC's Facebook fans.  It will be released in Europe/Asia later this year. LONDON – 17 May, 2010 – HTC Corporation, a global designer of smartphones, today introduced HTC Wildfire™, a new HTC Sense-based Android phone that integrates the most popular social networks to help bring your friends closer to you. HTC Wildfire closely follows the success of the acclaimed HTC Desire and makes the company’s signature HTC Sense experience … END_OF_DOCUMENT_TOKEN_TO_BE_REPLACED